While walking around Emerald City Comicon, I was struck by the large number of webcomic creators who had plushies for sale. It seemed like all the big name comics (and some upcoming creators!) had a fuzzy critter for sale. They were all cute, so I had to take a few of them home:

Several comic creators talked to me about what inspired them to make their plushies: 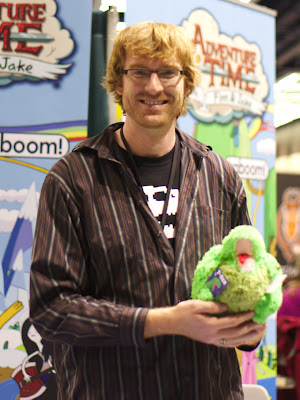 Ryan North of Dinosaur Comics loved the irony of turning his T-Rex character into a plushie. “I thought it would be great to see a tiny green furry T-Rex, when in reality they were the exact opposite of all those things! Well, except for green. Maybe. WHO KNOWS??”

Ryan worked with Squishable until T-Rex was just right. “We went through a few iterations until we landed on something that was both cute, fun, and looked like the character in my comic—just, you know, rounder and with a few pounds packed on. It was a really fun process to create something like this!” 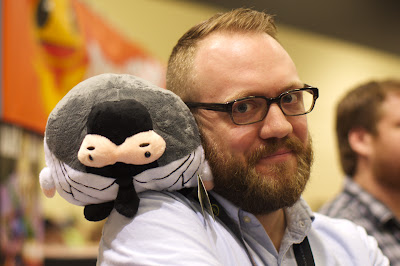 Christopher Hastings, creator of the Dr. McNinja comic, decided to follow Ryan’s lead and make a McNinja plushie. “Squishable had already made a plushie version of T-Rex from Dinosaur Comics, and I knew they had plans to make other webcomics Squishables, all of which look great. I met the company founders at a convention, and it turned out they liked Dr. McNinja! Just on a lark, I grabbed a post it note, drew a circle, put a ninja mask and a tie on it, and we all decided on the spot it needed to become real.” 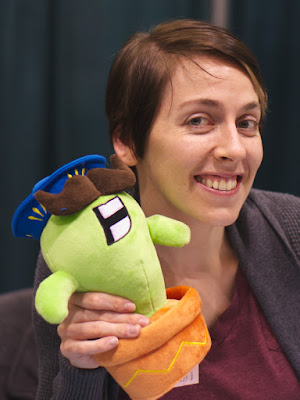 Danielle Corsetto, creator of Girls with Slingshots, has been plotting a McPedro plushie for quite some time. “McPedro was actually sort of designed to become a plush toy in the first place! But I hardly needed inspiration to go through with it; I was being asked to make him into a plush for YEARS from readers.” Danielle worked with Soft Stuff Creations for about three months to get McPedro just right. 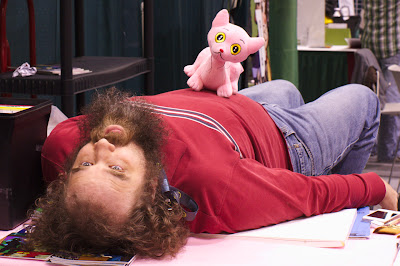 Randy Milholland, creator of Something Positive, also used Soft Stuff Creations to make his Choo-Choo Bear plushie. Randy sold out of his plushies by mid-day on the first day of ECCC. 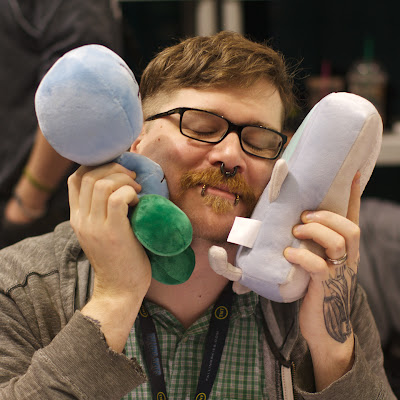 Questionable Content creator Jeph Jacques loves his Pintsize and Winslow plushies, which are also made by Soft Stuff Creations.

The Making of a Plushie

Many creators are choosing to turn their favorite characters into toys. Is 2012 the Year of the Plushies? Will we see more webcomic characters become flesh, er, fuzz?

Making a plushie is actually a hard business decision. Many toy manufacturers charge an upfront sample fee, and require comic creators to order a minimum number of plushies. This means creators have to sink a large chunk of change into a batch of plushies before they can even test whether it will sell. Some comic creators simply may not have the space to store hundreds of plushies, even if they have the money for the upfront cost.

There are several options for creating plushies, ranging from finding a partner to hand-make a small batch of plushies, to ordering thousands of plushies from a big toy manufacturer. 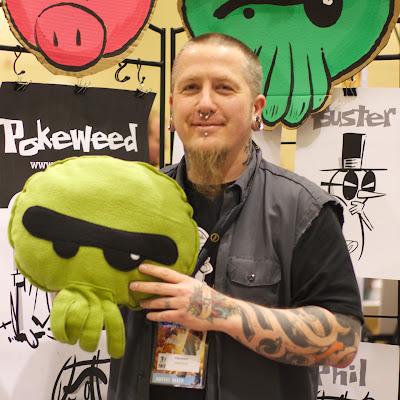 Drew Pocza, the author of Pokeweed, decided to commission a small batch of five Chuck pillows from a local craftsperson, Chelsea Wessling. “Each of the pillows are handmade, so they all have their little quirks.” One of the happy accidents was that the tentacle piece on some of the pillows didn’t get completely sewn shut. That means you can stick your fingers in the tentacle “finger pocket” and make them wiggle. It sounds odd, but it’s actually really fun to make a Cthulhu-like pillow wiggle its tentacles. “Everyone loves it! I emailed our designer and told her to keep the pocket.” 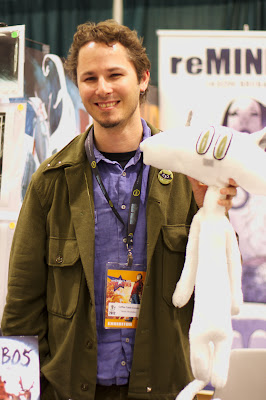 Jason Brubaker, the author of reMIND, also worked with a local craftsperson to make his Victuals plushie. “I was at my first convention (Anime-Expo in Los Angeles) trying to sell copies of my book, reMIND, and I realized that I didn’t have much merchandise to sell. I thought plushies would be a good addition but I never considered it because it seemed like too much money to produce. Then I kept noticing people walking by with plushies and I finally asked one of them where they got it from.”

Jason went to Artist Alley and found the women who were selling their handmade plushies. Alexis and Ariana Holverson normally sell the creations in their “Kun Kingdom” Etsy store. Jason convinced them to create a plushie of his character, Victuals. They were even willing to make a sample for free for him. 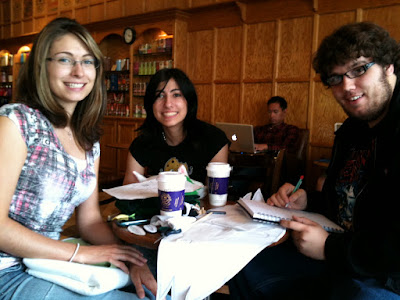 Alexis and Ariana live near Jason, so it’s easy for them to collaborate on the plushie. “We meet up at a coffee shop and I decide what I want based on the prototypes they made.” Jason pays for half of the cost of the plushies up front, and then pays the rest on delivery. The plushies take 3 to 6 weeks to make.

Jason can order as few as just one plushie, but it isn’t easy to order a large batch. “So far I have ordered 25 at a time. That seems to be quite a bit of work too so I couldn’t imagine asking them to make more than that.” 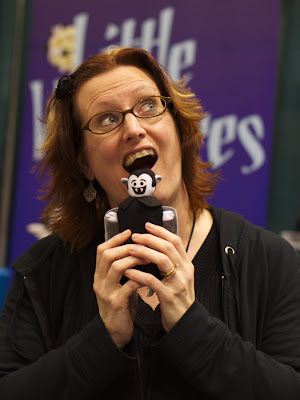 Rebecca Hicks, the creator of Little Vampires, decided to go with a medium-sized company, Mascot Factory, to make her vampire plushie. Mascot Factory charged $250 for a sample, but deducted the sample price off the final order. They also re-worked the sample for free until it was just right. Mascot Factory’s minimum order for a production run was 600 plushies, which was a daunting number.

The key question in Rebecca’s decision to make a large batch of plushies was whether her Little Vampires characters had appeal to non-readers. “We did well selling merchandise that featured them, such as hand-crafted magnets, buttons, art prints and T-shirts. We knew that the design of the character had appeal beyond the fans of the books and webcomic. And that was key. A plush needs to have visual appeal to people that have never heard of you or your work.”

Rebecca looked around to see what made other comic creators successful at selling to non-readers. “A good example would be Randy Milholland’s Choo-Choo plush. He sells a bunch of those to kids, and his comic is not for kids. But it’s a cute pink cat. You don’t need to read Something Positive to love the look of a cute pink cat.”

In the end, Rebecca’s initial investment paid off, and she has sold most of her 600 plushies. “I believed that the character design was strong enough to sell beyond my fan base. And I was right.”

Rebecca’s vampire plushie took about three months to make, including prototyping and production. “Getting a plushie made is a big business decision, and can’t be done at the last minute.”

Many other big-name webcomics creators use companies like Soft Stuff Creations or Squishable to create their plushies. We talked with both companies about their plushie production process. (Try saying that three times fast!)

Soft Stuff Creations are made by hand in Asia. Vivian says they charge $250 for a sample, which takes around 20 days to make. Reworks of the sample are free. The minimum order is 1,200 pieces, and half of the final cost needs to be paid before production can start. It takes 90 to 120 days for the final production run.

Vivian says that the final price of the plushie varies a lot. “Pricing is based on the size, complexity and quantity ordered. If your item or character wears clothing for example, the cost could add up very quickly depending on the amount of detail required. Embroidery, imprints are all great ways to add detail but do factor in to the total cost.”

Vivian says that smaller plushies are not necessarily cheaper. “Sometimes when an item is extremely detailed it can be almost the same price as making a piece in a little larger size. We have to remember that these are all hand-made items so producing a smaller plush piece can make the item more difficult to work with.”

Vivian mentions that it’s really important to send an accurate picture of what you want your plushie to look like. They need images of the front, back, and “turns” of the plush. The facial image of the plush is very important. “The factory will take the image very literally. If you want a smiley face on your character and you send us an image of an angry face, unless you tell us otherwise or provide us with a different picture, you will get an angry face on your plush guaranteed!!”

Squishable makes both the Dinosaur Comics plush and the Dr. McNinja plush. They make cute, round, huggable toys, and even have a webcomic about five of their fuzzy creations who come to life.

Zoe of Squishable was kind enough to talk about their production process. Squishable plushies are made in either China or Indonesia, but Zoe says they source some of their materials elsewhere. “Fun fact, we use South Korean fur because it’s softer. Globalization!”

Squishable production run minimums are based on a minimum amount of fabric that has to be bought. That means a minimum order might be a smaller or larger number of plushies, depending on the final size of the plushie. Production runs tend to be on the order of 1000 plushies. Cost for the initial sample size also varies a lot based on the actual plush.

Zoe also has some tips for comic creators who are considering making plushies. Zoe says the biggest challenge is making sure you have a fan base who wants a plushie, and making sure you have enough space for your plushie stash. “Depending on the size of the plush you’re going for they can really take up room!”

Zoe also says that comic creators need to plan for at least four months of plushie design and manufacture. “Usually a plush goes through at least two or three rounds of prototypes to get a plush just right, which can take up to a couple of months if we want it perfect. Once a plush is finalized, we’re talking another three months to get them manufactured and shipped to your door!”

When asked if there was anything else comic creators should know about plushie production, Zoe said, “Plush is awesome!! That’s pretty much it. We’re kind of obsessed.”

Ready to Make a Plush? 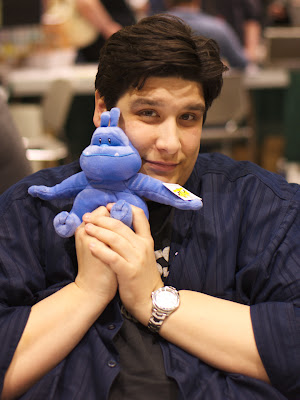 Plushies are cute, but it can take money and time to produce them, as well as a lot of storage space to hoard your unsold toys. If you’re considering making a plush, you can try to work with a smaller crafts company like Kun Kingdom, a medium sized production company like Mascot Factory, or a larger toy manufacturer like Soft Stuff Creations or Squishable.

Tell us about your plushie production story! We would love to hear experiences from more comic creators. If you have a story, please email info@comic-rocket.com.

Comic Rocket is a new online comics reader that helps users find, read, and bookmark their favorite stories for free with complete archive links and comics data too! Sign up today and start reading webcomics the easy way!